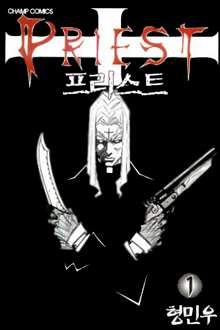 Priest (Hangul: 프리스트) was a manhwa (Korean comic) series created by Hyung Min-woo. It fuses the Western genre with supernatural horror, Gun fu, and dark fantasy themes and is notable for its unusual, angular art style. An interview with Hyung in Priest: Volume 3 states that the comic was inspired by the computer game Blood, which featured a similar horror-Western aesthetic and undead protagonist.

The story spans three distinct time periods: modern times, the Crusades and the Wild West, and is primarily focused on the last period. Priest tells the overarching story of humanity's battle against 12 fallen angels. Despite having fought for God in the epic war against Lucifer, Temozarela discovers that God had lost interest in his angels. Upon finding God has focused his attention on humans Temozarela decides to rebel against God. He and his cohorts descend upon Earth to 'play God' among the humans who build a temple and statues for them. For their rebellion and acts against humanity, God destroyed their temple and their statues were cast underground, with their souls being trapped within the statues.

The lead antagonist of Priest is Temozarela, a fallen angel, whilst the main protagonist is Ivan Isaacs, a now immortal, 19th century priest who sold his soul to Belial, a former priest turned devil, in the pursuit of revenge for the death of his lover Gena, and redemption after unwittingly unleashing Temozarela from the Domas Porada, a prison of sorts constructed by Belial (then Betheal) to imprison Temozarela. 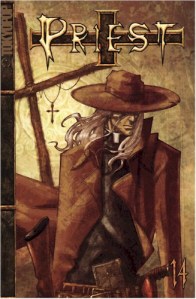 The upcoming film not surprisingly takes many liberties with the original material. The film in general abandons much of the religious aspects of the comic book which featured 12 Fallen Angeles/demons, villains from the Old West, and the main antagonist Temozarela, a fallen angel.

The film replaces them with vampires and a satanic priest named Black Hat played by Karl Urban. Ivan Isaacs (played by Paul Bettany) is transformed from a demon possessed priest who witnesses the murder of his adopted sister in the graphic novels to a priest vampire hunter who tracks down his kidnapped niece. The main setting in the graphic novels is the Old West but in the film the action occurs in an alternate universe.

Community content is available under CC-BY-SA unless otherwise noted.
Advertisement