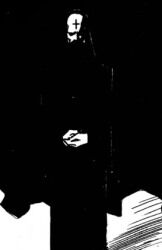 Betheal Gavarre, also known as Belial was originally an inquisitor in the medieval church called Betheal. However, he eventually comes to preside over the case of the possessed Vascar de Guillon, who has been captured. Temozarela, who is inside Vascar's body, influences Betheal's adoptive son, Matthew, to slaughter one of the women at the monastery where he and Betheal are staying. Betheal, on hearing his son confess this, becomes enraged and strangles him, not fully realizing Temozarela's influence within him.

Later, he realizes that Temozarela had orchestrated this to shatter Betheal's faith and had succeeded. In remorse and in rage, Betheal sacrifices himself to become the devil Belial by condemning his faith and renouncing God. However, instead of joining Temozarela, Betheal uses his new power to fight against him, eventually imprisoning himself, and Temozarela in the Domas Porada to keep him from the world. Later, after the Domas Porada is opened, he offers a deal to the imprisoned Ivan Isaacs, which the insane priest agrees to, leaving Belial's mark of a cross in a circle branded on his forehead.

Retrieved from "https://priest.fandom.com/wiki/Betheal_Gavarre?oldid=5009"
Community content is available under CC-BY-SA unless otherwise noted.